Posted by admin
in Uncategorized
0 comments

We are always excited about a new home; buying or building. The excitement is tenfold when you are expanding a family in the process of building a home. This was the story of our clients. At the beginning of the designing process, our clients found out that they were pregnant. Their joy and their excitement uncontained and absolutely infectious. Rarely have we had clients where both the husband and the wife have been deeply involved in the design and execution process. They practically became members of our team. The design process with Utkarsh and Aastha Dubey although was turned its head. They a lot of important memorabilia that they wanted at the forefront of their house. And so instead of buying the accessories according to the décor; we built the home around the accessories.

Our starting point for the analysis of the living room was natural light. Off to the right was a large 160 sq. ft terrace connected to the room by a set of French doors providing an abundance of natural light.  The drawback there was that the balcony was North-facing. As a result, the light indirect. Which meant, the Sun would rarely filter into the room. Adding yellow to the colour palette would bring in the ‘sun’ in a roundabout manner. Plain white walls create the illusion of a larger room and the wood brings in warmth. They had a deep love for teak and brass, cutting down the agency-client debate to half.

The kitchen was smaller than they would like, limiting the storage. The idea was to create a breakfast bar with storage underneath. To turn it into a wholesome unit, we added a paneling with storage on the side and continued to form an upside-down U.

First impressions are lasting. The first thing that anyone sees when they walk in speaks quite a bit about the residents. A Sleek Wooden Console with golden finish was a must have.

Bringing in the sunshine was a challenge made easy with the Urban Ladder Hagen Lounge Chair. The mid-century legs and sleek back with the hit of grey in the piping add the warmth to the room. One of the key concerns was to avoid hard edges in the room. These armchairs were vital.

To complement the Hagen Lounge Chairs, a light coloured couch that was not quite white would create a pretty complement and increase a styling moment with the cushions. CUBS firmly believes in creating bright and colourful living spaces.

A living room is incomplete without the trifecta, tables (side and coffee), couch and armchairs. The side table was from Fab India. The Coffee Table, almost an heirloom (one generation is an heirloom, right? Okay. Fine. An heirloom in making!)

Utkarsh and Aastha knew what they wanted and would not compromise. They were happy to source materials from different cities when they had to. The statement piece of their living-cum-dining room, a traditional swing was one of their major requirements when they came to us. The materials for the same, solid teak and Brass chains were bought in from Chennai.

The sheer curtain, also the clients’ choice, came from Indore.

They have a semi-open space plan, which meant the dining and the living room were in the same area. Solid wood was something they like not just for the look but for the quality as well. The dining table and chairs are solid walnut; the Delmonte Bench Dining Set from @ Home.

The peninsula kitchen was actually an L shaped one. And what is a pseudo island without bar stools? FabIndia was the go-to for the client! 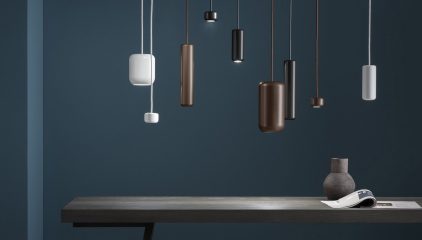 All About Lights – A Starter Guide

The plethora of lighting option can honest-to-God confuse even a designer. The types, styles, colours,…Read more 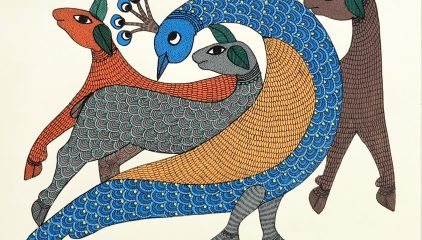 Art of the Earth 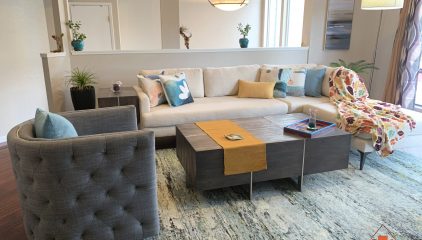 With e-commerce industry in India still at its nascent stage, we as designers are always…Read more 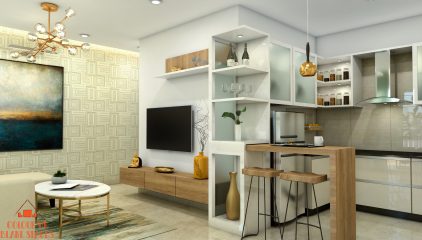 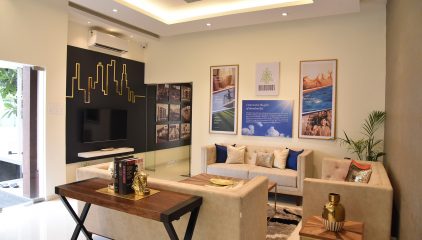 Some stories are very difficult to pen down.  Like they say it’s the journey that…Read more 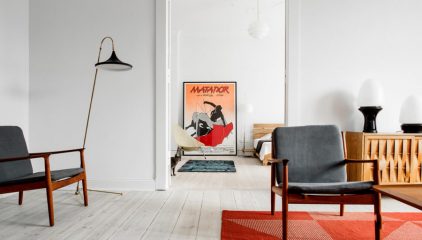 When someone decides to make a house, it’s never a new or a fresh decision.…Read more